About 6 months ago, when we were in New England or on the east coast somewhere, our dear friend Iain Whitaker, of Aspen Cycling Tours, offered Jon a job as in-house chef for his next client trip to Mallorca, Spain.

We barely had to think about it, other than to decide upon an airport and a plan for Penny. We accepted his offer, which would include a week of riding, cooking and supporting his clients followed by a week of riding on our own with a bonus stop in Amsterdam on the way back to the States. As is the usual in van life, we plan our days and trajectory on firm dates, regardless of how far in the future they may be, and fill in the gaps as we go. We hypothesized that coming back to Boulder in mid-April for the flight seemed like a reasonable destination and allowed us a chance to leave Penny with people she knows. I was not expecting the few days back in our town to feel quite as overwhelming as they did, but more on that in another post. 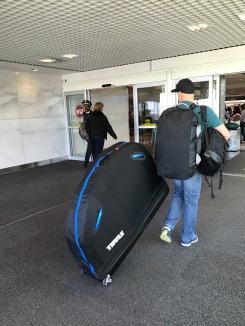 As this was Iain’s trip and we were only responsible for feeding 5 guests plus staff, I did absolutely zero research. All I knew was that one of my closest friends from growing up lived in Mallorca for a year and loved her time there. After an 8 hour lay over in Amsterdam on the way over, which gave us a chance to walk the idyllic canals and drool over an entirely different and appealing way of living bike life, we landed at our final destination, an island off the coast of Spain. We quickly settled in to our villa, which would be home for 2 weeks, and met someone who, in my opinion, would become the star of the trip, Ottilie Quince. Ottie is from England and has been living in Mallorca for about 1.5 years. She would serve as our local guide and quickly become our friend, physio, gelato enabler, laugh initiator and my personal spirit animal. Anyone traveling to Mallorca has got to go to Ottie’s Service Course and pay her a visit, get a massage or go for a pedal. 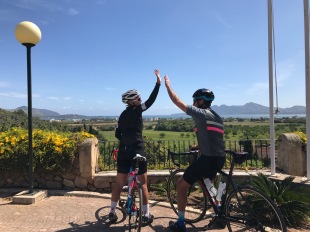 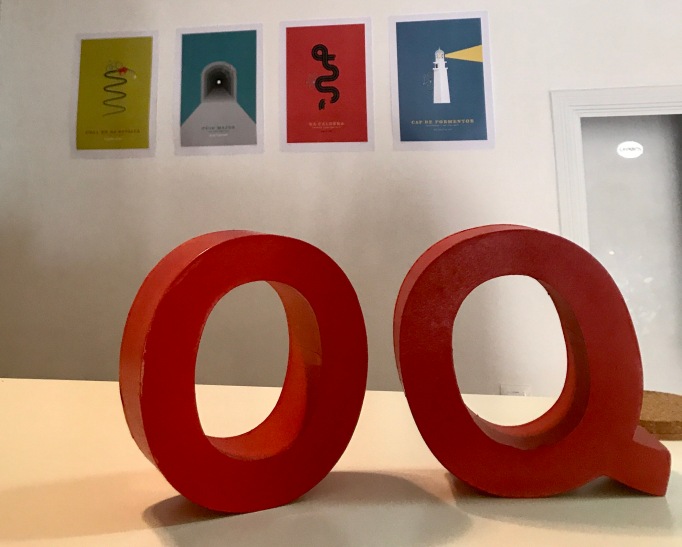 Ottie started rattling off rides and names of climbs that would take me a few days to comprehend given the “Spanish names with English accent” pronunciation.   One purchase of a tourist bike map and the island was starting to make sense. I rented a Trek Edmonda with Shimano Di2 from the local rental shop. It was totally fine, not great, just fine. Old Trusty #67 ended up with a massive mechanical on day 2, but she got the job done thanks to Ottie letting me borrow her woman’s specific saddle. The pure joy of not schlepping a bike around on long travel days has almost no value, but then again I have a couple of sweet bikes who will be worth the hassle next time. When you ride a zillion miles, having your own set up is the only way to make awesome riding even better.

We hit all the classic Mallorcan rides and I’m already looking forward to going back and doing all the other stuff! We started off with Cap de Formentor, which is a sneaky way of climbing 3000’ in 35 miles but feeling like maybe you made a 50’ rise. The views and the grades are stunning and the turn around point is a lighthouse, so naturally we made more than one trip to this destination. 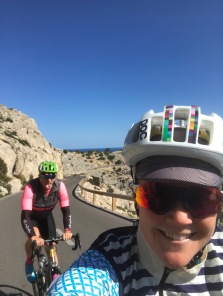 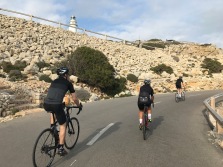 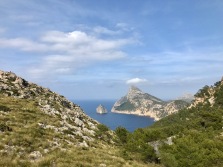 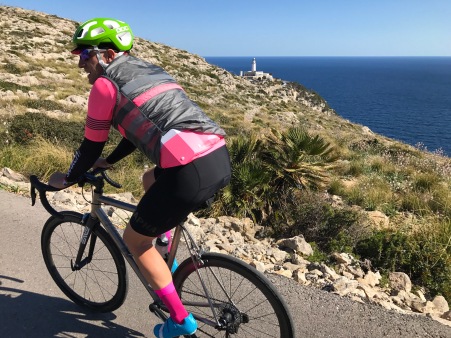 We set out to do the first ride to Formentor with the clients late in the afternoon, perhaps thinking that the crowds would be less. Not true. When I say crowds, I mean droves of cyclists everywhere.   Even now as I write this I have to say that I’m convinced to come back slightly before or after peak season. There is safety in numbers for sure but when pelotons upon pelotons are passing other pelotons it’s a bit overwhelming. In our 10 days of riding we got about 50 friendly returned waves and THREE people calling “on your left” as they passed. I’m not saying that coming off peak would fix this problem, but it’s indicative of the crowded roads that can become worrisome when cyclists are under fed and over tired. ** see below

It would be boring to sit here and describe every climb and ride we did. There are other resources for that. Rather I’ll highlight my two mega huge days and one windy noodle. Let’s start with the noodle.

Guess what, islands are windy! No kidding. One of my most favorite days on two wheels with our guests was the day that Ottie took us on a winding noodle along the coast, ending with a stop in Historic Pollensa Town Square. We bobbed and weaved on sweet quiet and vaguely familiar roads until all of the sudden we swooped around a big right turn only to be presented with a breath taking view of a bay with crashing turquoise waves and beautiful hillsides. From there, after a blustery team photo, we followed Ottie through the nooks and crannies that lead to Pollensa Town Square, which is as adorable as it sounds. Three hundred and sixty-five stone steps lined with adorable picturesque shops emptied into the main square, which was outlined with fresh bright flowers and church steeples. It was the perfect setting for late morning coffees and cakes. We laughed and pedaled and no body seemed to care that the 40+ mph swirling wind was stopping us from epic miles. It was truly a day of being a tourist on two wheels, a pace and vibe that Jon and I know intimately. 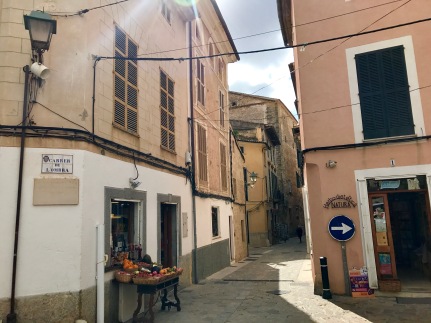 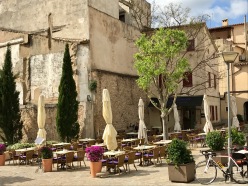 But then again, all days can’t be about noodling around a cute town, now can they. Fast-forward to the day that the guests left and we found ourselves with a small list of classic rides left to accomplish, namely Col de Sa Batalla, Col de Soller, Puig Mejor & Sa Colabra. Yup, got ‘em all done! Jon was kind enough to tackle Sa Colabra with me at “Pamela’s Pace” which, given enough time, will get you there every time! From the villa it was a 57 mile round trip with 7000’ of climbing. That’s a big day for this girl; especially considering the difficulty we had with consistent riding during the winter due to weather and location. However, with my patient pace car, we got it done and ended with a well-earned homemade gelato dipped in chocolate. There were approximately one million cyclists on the idyllic switchbacks that snake down to the Port de Sa Colabra and it’s true what they say, misery does love company. As my friend Nicole from Bicycles & Coffee says, Sa Colabra is like having your dessert before your veggies. You get to enjoy a crazy fun descent and then turn right around and ride up that beast. I was quite proud of that day, as it was the biggest miles to vertical feet climbed ratio I’ve done to date. 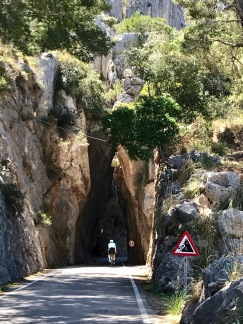 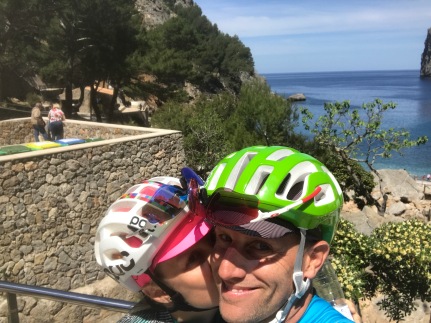 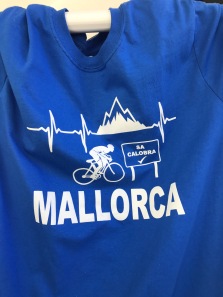 And then, two days later, we went kinda big again, but this time as a group. Our original plan was to take a shuttle to the start of the Ma 10 (main road/highway along the coast) and ride all the way back to the villa, adding on Sa Colabra again as an option. However, the idea of getting in a car to ride was unappealing so we decided to loop it from the villa. It was going to be about 75 miles or 90 miles depending on what folks wanted to add on to the ride. It included Col de Soller (a 52 switch back climb) and the elusive Puig Mejor. As soon as we started pedaling I could immediately feel the effects of my big day on Sa Colabra. My quads burned on the flats. Not a great start. I decided I’d give myself about 15 miles and see if I could get more comfy on the saddle. I was downing Skratch at a rate much faster than normal, knowing that the salt would help with my muscle fatigue. It was working, but I was clearly the weakest link of the group. I told Jon that I should consider my impact on the pace of the group and that perhaps I should head back while I still could. Without engaging me much on this topic, he assured me that I was doing fine and to keep pedaling. I continued to tell the group that I was fine, but slower than normal so if dividing and conquering seemed like a good idea, I was ok with that. But those gents didn’t budge. We conquered the mouth-watering grade of Col de Soller together, enjoyed some beautiful pastries at Ca’n Topa and pressed on through the beautiful town of Fornalutx on the recommendation of our friend & guide, Russ Folger. Somehow the group split up at this point, perhaps because we were riding through spaghetti noodle streets that were as wide as our van paved with cobbles? Man, that town was scrumptious.

Once the group disbanded it was, as always, Jon and I against the world. I’m not ashamed to say that as we climbed out of that town in search of the Puig Mejor, I almost cried. I was exhausted. I was fed. I was hydrated. I was warm. But I was so tired. My legs had no go and, according to Jon’s report, we had a 15 km climb ahead of us. I couldn’t do it. People were passing like we were standing still. Jon was blasting music, which was making me crazy, but who was I to deny my pace car, my cheerleader, my coach one bit of peace and happiness as he pedaled at a painfully glacial pace just ahead of me. I focused my attention on some random 10 km distance to a tunnel. It hurt. As we were approaching the tunnel it started to rain and the lump in my throat grew. I was on the edge and a simple drop of rain almost pushed me over. I told Jon that I needed to stop at the tunnel and regroup. Once we stopped I told him I was about to fall apart, to which he responded, “Oh I know. But I won’t let you. It’s your mind that’s the problem, not your body”. I was fairly certain that it was all of those things, starting with the cement in my legs, which were the issue.  We then looked around and noticed the droves of cyclists whom we were amongst seemed to be celebratory. We would later find out that the tunnel marked the top of the Puig Mejor, the classic climb we had been in search of.

While I mentally prepared for a minimum of 5 km more of climbing, Jon checked his Ride w GPS and informed me that it was time to descend. WHAT?! His calculations had been wrong. We were DONE. I practically jumped back on Trusty #67 and floated back to the villa. I’ve never gone from the lowest low to the highest high so quickly. Thank you, cycling.

In conclusion, on the 11th day on Mallorca, I did not wear spandex and I basically did not move. Rather, we started scheming a return trip in 2018. Hasta luego, mis isla bonita (Thank you high school Spanish & Madonna for that one!). 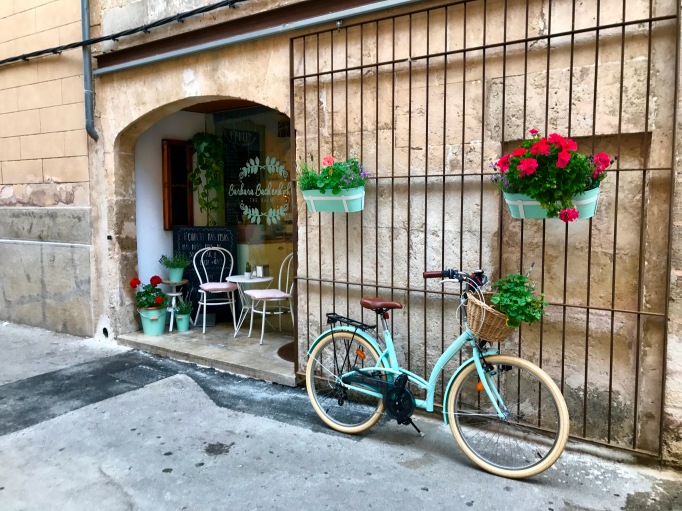 ** We, as advocators and influencers in the sport have got to bring back friendly waves and communication. Communication simply within your group ride is not enough as we share the roads with others. We can’t get upset at cars putting us at danger when we the cyclists are not helping each other out. How do we make cycling smiley, friendly and safer again?

The Power Of The Bike + Pearl Jam At Fenway Park

There was an error retrieving images from Instagram. An attempt will be remade in a few minutes.