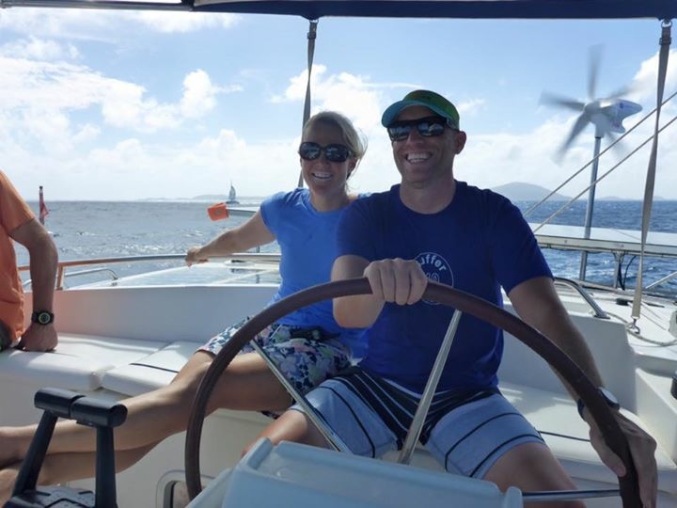 Yup,  the Robo’s went sailing. True story.  We didn’t run (ok fine, we did for like 30 miserable minutes) or ride, we sailed.  Both of us sailed.  Not just the one of us who is known to have a history of sailing, both of us.  And by both, I mean JON!

We already know that the guy is kinda like RainMan when it comes to engines and motors, so I was not surprised at all to see him working the dual engines on our 42′ catamaran during a docking procedure on our most recent adventure. However, when it came to a 15 mile close reach (ok maybe hauled) journey, Jon took the helm like a seasoned sailor. Huh?!

Let me back up for a moment. As Jon stated in an earlier post, we have just returned from an incredible sailing journey down to the British Virgin Islands for our friends, Holly & Greg, wedding.  I, the one w with the “sailing experience”, have been down to the BVI’s a couple of times in my late teens, but Jon had never been and didn’t exactly know where we were going until he got the airport and said verbatim  “Which general direction is the plane flying?” (see previous post re: #ChasingFall15).  Let me back up just a titch further.  My family and our dear friends, the Haesche’s, have a long history of yachting adventures, and we were lucky enough to call a 44′ mono haul named Sweet Illusion (quickly to be renamed Sweet Confusion) home for a week of sailing around the BVI’s back in the mid-90’s.  The teens on the trip were accustomed to our extremely experienced co-captain/fathers taking the helm, offering up the occasional burst of energy for a mooring or anchor drill.  Our mothers did the provisioning and food prep.  And the kids, well we got tan and some braids in our hair, if memory serves (always a bad idea).  The point is that, while I know my way around a boat having grown up in Marblehead, MA and spending summers on Cape Cod, I’ve never had to be an active member of the crew on a cruising trip.  On this trip however, game on!  Our captain was new (and totally awesome) but he needed to know that a couple of his shipmates could be his 1st mates.  Myself and my friend Leo where those people and it turns out, so was Jon. Three first mates?! Lucky Captain. It was refreshing, and surprisingly exhausting, to take on the responsibilities required to actually cruise (i.e. make the boat move safety from point to point, get people fed, etc), but it was awesome in a completely intangible way.

For this 2015 trip, aptly referred to #BVIGoneWild or #BVINuptuals, we had 40 friends, 4 catamarans, 5 captains (safety first), experienced seamen, novice land lubbers, oh and ONE WEDDING.  The memories, pictures, private jokes, stories, embellishments will remain at the forefront of our brains and conversations for a very long time.  I can’t begin to describe the gratitude I have for being able do such a trip now as an “adult”. I keep telling Holly that we are “lucky ducks” and I hope that does it justice because I’m not able to say it much better than that. However, there is one thing for which I am extremely grateful: After knowing Jon for 9 yrs, I learned something new. I didn’t know he had such a good feel for boats, particularly ones under sail.  To still be learning something new after being friends (3.5 yrs of friendship lead up to this union, more on that later) for such a long time is irreplaceable.

I always say that the ocean and boats are my happy place and I’m not sure I’m capable of explaining why.  They just are. I feel at home and at peace and it’s likely tied to my tremendous childhood and family ties  to all things water related. Now sprinkle on this little factoid that my husband not only knows how to sail, but he’s interested in taking a sailing course with me and doing a delivery from the Bahamas to Bermuda with my dad…that’s a happy place indeed. #RobosGoSailing

The Roaming Robos will be back 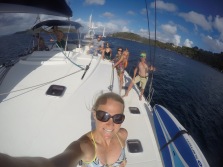 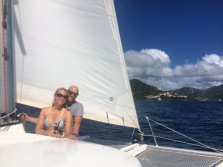 One thought on “Robos Go Sailing”