As a follow up to Jon’s post about the build out (click here for initial build out and here for upgrades), I’m going to expand a bit on keeping our Boxer pup cool and comfy.  Whenever I Googled “traveling with a dog” I came upon sites that said it was unsafe to leave a dog in a car. Yes, I agree.  However, our van (recently being called Ellie, short for elephant because she’s big + grey…sure, why not) is a tiny house on wheels.  It’s an opportunity to bring out little fur baby on the road with us so we have to make it work.  And here’s how:

1). Vented windows:  One of the things that Barry at VanWorks did was install vented drivers side windows.  This means air movement, which means cooler temps. 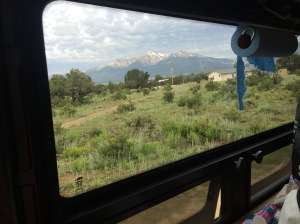 2). Ceiling Fan: Jon wrote about this in the previous entry.  It has a thermostat and goes as low at 60 degrees.  It has a rain sensor which is great at times, but we can override it so that when we leave Penny Love in the van it stays open. I’d rather deal with a bit of a wet van than a cooked puppy

3). Crate Fan: just a small fan that is on top of Penny’s crate and blows directly on her.  There are 9 million to choose from on Amazon.  We do have an awesome travel crate for little Penny.  Van life is new for her so we want to set her up for success. Maybe down the road we will leave her to roam the inside of Ellie, but for now crate= a safe, comfortable and successful dog…which makes Jon & I very happy.

4). Reflectix Window Covers: Yup, me and a sewing machine. We purchased a big thermal window cover for the front windshield, but I made 6 others for the front, side and back windows.  They are a huge part of keeping the interior cool as well as providing privacy. I sewed material to the inside for a little more decoration to the interior of the van. They attach to the windows via magnets. Magnets are my new favorite invention.

5). Mats:  We have a few mats for Penny. One is a cooling mat we found on Amazon. We even use it in the house on hot summer days outside of the van. She LOVES it. We can put it in her crate or on the floor and she really enjoys it.  Then of course Penny is a little wussy and she prefers to lie on a mat when she’s outside. She needs a sponsor.

We’ve tested our systems for about 3 hrs at a time and we can keep the van under 80 degrees with air moving as it sits in the exposed Colorado sun.  This means Penny isn’t panting which means she’s happy. (It’s also an excuse to ride a little faster and take fewer breaks so we can get back to let the dog out.  Thanks for making me faster, Penny Love)

This little fur baby is teaching us a LOT and we are grateful. After our recent trip to Crested Butte I learned 3 things:

1). Eat as a family.  Our little dog-cat usually grazes for her meals. She doesn’t have set meal times and kinda doesn’t care about food, which means ensuring that she doesn’t turn in to skin and bones is a bit challenging.  All we have to do is pay attention because she is showing us what works for her. She prefers it when Jon and I to sit down properly to eat and only after that has occurred will she consider eating her food.  Thanks pup, noted.

2). Take the back roads.  Penny shakes if she’s on the highway for too long at top speeds.  Good advice.

3). Go to bathroom in pairs.  One night when I knew Penny had to go, we went for a little walk. After a while of walking without any action, I realized I had to go. So I found a spot and assumed the position. Penny took one look at me and followed suit.  She just needed a little advice.  Van life is new for all of us, little girl, we will figure it out together.

10 thoughts on “How Penny Love Keeps Her Cool”

The Power Of The Bike + Pearl Jam At Fenway Park

There was an error retrieving images from Instagram. An attempt will be remade in a few minutes.